The Monogram Handbook by CarolinaClover.Com

Monograms are a uniquely personal, they make gifts truly thoughtful! With so many options available today for monogramming gifts, jewelry, and cars and home decor, I thought I would publish a handbook, some etiquette or "the monogramming bible" guidelines, per se, that are traditionally used for monogramming. This is what CarolinaClover.Com's research has discovered on how to monogram gifts...

About monograms, what is a monogram?

It seems obvious, but a monogram is a letter used to signify one’s entire name. A monogram may be one or more letters. The “more” letters will be explained in a bit. Here is an example of a single monogram for “Dawn”, choosing to use her first name monogram.

When a single letter is used, it is usually the first letter of the persons first name or last name. For example, if Jane Doe Smith you would monogram with a single J or a single S.


Depending on the item you are having monogrammed, you might choose the first name or the last name.  If I was buying Jane a monogrammed coffee tumbler or a piece of jewelry especially for her, I would probably monogram it with and "J". If I am putting a single letter monogrammed license plate on her family's car or for a flag for her mailbox, I would monogram it with a "S" for the family.


Two letters - Two letters can symbolize one persons first and last name. In Jane Doe Smith's two letter monogram it would be "JS". This would be done in any single letter font with no structural design like this:


Three letters - The first letter of one persons first, middle, and last names. You would be monogramming their initials if for Jane Doe Smith your monogrammed "JDS". Special formats are used to set the last name off and in this case, Jane Doe Smith looks like this "jSd", the family name or the initial of the person's last name is featured in themiddle with a fancy font like this:

The first letter of the persons last name is larger and placed in the center with the first initial and the middle initial on each side. With all three letters the same size, the letters appear in the order the name is normally written and this is referred to one's initial's like this:


One letter - A single letter can symbolize the first letter of a couples or families last name. Jane and John Doe's monogram could be just "D"


Two letters - Two letters can symbolize two persons first names. Jane and John Doe's monogram could be:
JJ, but this is not really common.

A Post-Publish on Wedding Monograms...
A couple may use their first name initials prior to the wedding and during the ceremony. For example, their wedding invitation may state J + J for John and Jane. However, their last name initial should be reserved for use for post wedding ceremony and their married life. For example, a couple could use their married initial of "S" for Smith on the beverage napkins for the cocktail hour after the ceremony.


A Word on Gender Monograms


Interlocking monogram is normally used for females only. With both the Interlocking and Round Monograms, the last name will be the largest letter in the center. Like this: 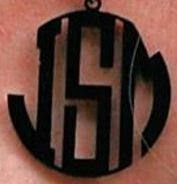 Round Monogram
The Round Monogram can be used for both males and females. The Block Monogram (normally the male monogram) will appear First Name, Middle Name, and Last Name in all caps. Like this:

CarolinaClover.com hopes this monogram handbook helps you feel confident in making your gifts personal for that special wedding gift or piece of jewelry that commemorates a special event in someone's life.Check out Carolina Clover's Web Store for a complete selection of monogrammed jewelry, gifts, and accessories. Thanks for visiting!
×